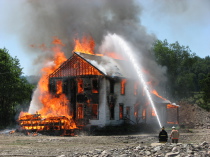 Our heritage is, obviously enough, fighting fires. The Tioga Center Fire Department was formed in 1949 to protect its citizens from fires of all kinds. Although our mission has greatly expanded over the last 60 years, we remain true to our roots.

Structure fires are arguably the most dangerous incidents that we are called to and are also the most manpower intensive. There are numerous simultaneous activities that must occur for a successful firefight. Hoses need to be laid and a water supply needs to established.

The crews going into the fire require a multitude of tools such as: hand lights, axes, haligans, radios, thermal imaging cameras. This is in addition to their protective turnout gear and Self Contained Breathing Apparatus (SCBA). Turnout gear and SCBA weigh an average of 45 pounds.

Structural firefighting is more than “putting the wet stuff on the red stuff”. Crews are making rapid searches for victims and the seat of the fire while others execute coordinated ventilation activities.

Ventilation is the controlled release of heat and gas from the fire and must be done in precise concert with those fighting the fire itself. The two prime methods of ventilation are cutting roof holes and breaking windows.

Backdraft is the rapid combustion caused by an oxygen-starved fire being suddenly supplied a large oxygen source and is sometimes referred to as “smoke explosion”. It is caused by a fire smoldering itself by using up all of the oxygen in a building, but still having tremendous heat. 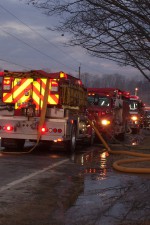 During an incident in which large quantities of water are required, typically structure fires, a secured water source is required from which tankers can shuttle water to the fire scene. In our district, a natual source of water (rivers, streams, ponds) is needed for a water supply. The method of water supply is to have a fire engine at the water source and one (or more for larger fires) at the incident. Water is pumped from the source into the tanker(s), which then transports the water to the incident, and then unloads at the incident, either by pumping their water into the engine at the scene, or into a portable pond. The attacking engines then draft water from the incident pond and flow it to the attacking hoses. 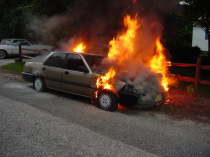 Most people think of structure fires when they think of the fire department, but we are called on to put out any type of fire. Sometimes a car has malfunctioned and has caught  fire. Although they may seem to be a relatively benign type of fire, they can be extremely dangerous.

Some of the hazards associated with a car fire include the fuel in the car. Classic cars carry significant amounts of gasoline, which is extremely flammable. Newer cars pose whole new threats, with hybrid systems containing high power electrical systems. The extensive use of airbags pose dangers unto themselves. 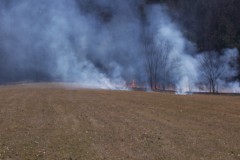 Another type of non-structural fire we are called to is a brush fire that has gotten out of control. These are fairly common during the spring and summer months. The primary hazards at a brush fire are the fire itself, the smoke cloud from it, and heat-related injuries (heat exhaustion, heat stroke, etc.).

Our primary tools for fighting brush fires are:

Indian tanks are back-pack containers with 5 gallons of water or water-soap and a hand pump wand with alterable nozzles. The wearer walks along the fire line ("black" or burnt side) and sprays down the fire and just in front of it. In this manner, just a few firefighters can quickly knock down a significant fire.

Brooms and rakes are surprisingly effective in fighting a brush fire. Brush fires are almost always confined to the top layer of flammable material on the ground. If the currently burning substance can be pulled away from the rest of the fuel source, the fire will be broken. Brooms and rakes are used to do this by standing in the black and pulling (rakes) or sweeping (brooms) the burning material towards you. Since the burning material is coming into the black, it will not ignite anything else on fire. Like Indian tanks, a few firefighters can knock down a significant amount of fire. Normally, Indian tanks and rakes/brooms are used together and provide the most effective combination.

Donate to us
Join Us